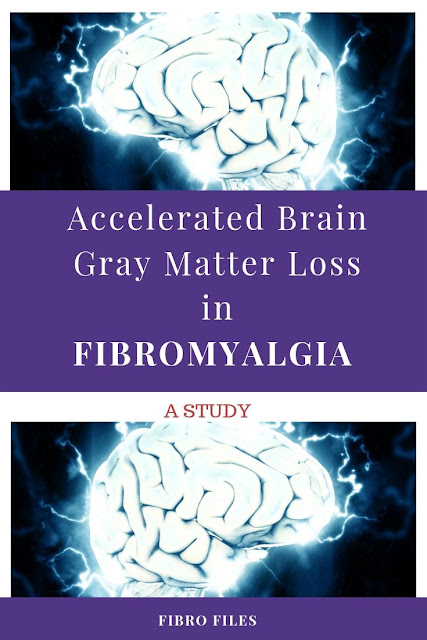 This a frightening and devastating discovery, of accelerated brain gray matter loss in Fibromyalgia. It is especially distressing when coupled with the symptoms most fibromyalgia fighters describe as brain fog - not being able to concentrate, not taking information in, poor decision making, poor memory etc. These symtoms are upsetting enough without knowing that our brain is losing it's gray matter.

Gray matter contains most of the brain's neuronal cell bodies. The gray matter includes regions of the brain involved in muscle control, sensory perception such as seeing and hearing, memory, emotions, speech, decision making, and self-control.

This report, published in The Journal of Neuroscience, April 11, 2007, showed there was a decrease in gray matter in fibromyalgia sufferers, relating to how long they'd had the disease. This decrease was much faster than in the normal population.


"The patients, who ranged from 27 to 61 years of age, demonstrated a yearly decrease in gray matter volume more than three times that of age-matched controls."

The research carried out at Universities in both Canada and the UK prove there is Central Nervous System involvement in fibromyalgia.

The question is are these changes in the brain the cause of fibromyalgia or as a consequence of it?

The good news is these findings may mean new approaches in treatment such as protecting the brain and could possibly mean symptoms may be able to be reversed.


Does anyone know of any studies that builds on this?


LINKED UP AT FIBRO FRIDAY No 6.