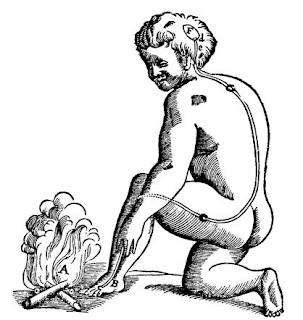 In the 17th century, the study of the human body and it's senses continued to be a source of wonder for the world's philosophers. In 1664, the French philosopher René Descartes described in his book, Treatise of Man, what is still called a "pain pathway." Descartes illustrated how particles of fire, in contact with the foot, travel to the brain and he compared pain sensation to the ringing of a bell.

"For example, if the fire A is close to the foot B, the small particles of fire, which as you know move very swiftly, are able to move as well the part of the skin which they touch on the foot. In this way, by pulling at the little thread cc, which you see attached there, they at the same instant open e, which is the entry for the pore d, which is where this small thread terminates; just as, by pulling one end of a cord, you ring a bell which hangs at the other end.... Now when the entry of the pore, or the little tube, de, has thus been opened, the animal spirits flow into it from the cavity F, and through it they are carried partly into the muscles which serve to pull the foot back from the fire, partly into those which serve to turn the eyes and the head to look at it, and partly into those which serve to move the hands forward and to turn the whole body for its defense" Descartes, On Man, 1662

Rene Descartes now known as one of the fathers of modern science proposed one of the original theories of pain. His specificity theory was that pain is related to the amount of injury inflicted. This theory is still accurate when applied to acute pain but not to chronic pain such as fibromyalgia.

THE IMAGE is from Descartes book Treatise of Man.
The long fiber running from the foot to the cavity in the head is pulled by the heat and releases a fluid that makes the muscles contract.
Posted by Good at 2:36 AM