The sleep connection with fibro 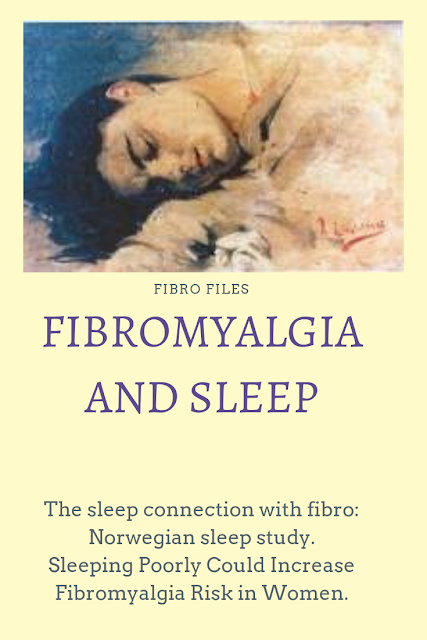 Here is more evidence of the sleep connection with Fibromyalgia: According to a Norwegian study Sleeping Poorly Could Increase Fibromyalgia Risk in Women.

Previously attributed to genetics, infections, and emotional or physical trauma, scientists now believe fibromyalgia is caused by disruptions in the sleep cycle. Published November 14, 2011 in the journal Arthritis and Rheumatism.

Apparently 90 percent of people with fibromyalgia are women and we typically start getting it in middle age.

Previously researchers have found that insomnia, night time waking and fatigue are common symptoms experienced by fibromyalgia patients, but it wasn't known if these sleep problems caused the development of fibromyalgia.

Norwegian researchers enrolled 12,350 healthy women, 20 years and older, with no musculoskeletal pain or movement disorders and followed them for 10 years. At the end of the 10 years, 327 (2.6 percent) of the women had developed fibromyalgia.


"Our findings indicate a strong association between sleep disturbance and fibromyalgia risk in adult women," Dr. Paul Mork, from the Norwegian University of Science and Technology. "We found a dose-response relation, where women who often reported sleep problems had a greater risk of fibromyalgia than those who never experienced sleep problems."

OTHER ARTICLES ON SLEEP: