Duloxetine in Patients With Fibromyalgia 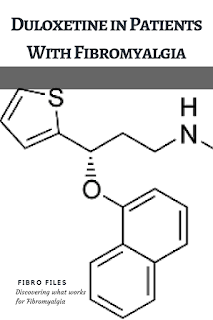 "Early improvements in pain during the first two weeks of treatment with duloxetine were highly predictive of response or nonresponse after three months of treatment." according to the researchers.


What does this mean??

It means there are signs when you first start taking this drug that show if it is going to help your fibromyalgia or not. This is from a new study published in the October 2011 issue of the Journal of Pain: the official journal of the American Pain Society.

Duloxetine, also known as Cymbalta, Ariclaim, Xeristar, Yentreve, Duzela, is a long-acting capsule used to treat depression or generalized anxiety disorder or the pain of diabetic neuropathy or fibromyalgia, or ongoing bone or muscle pain.

Duloxetine is meant to be better than many other medications for the treatment of fibromyalgia as it does not contain as many substances that can cause adverse reactions. Its effectiveness in pain relief is believed to be due to its changing of the nociception system. (pain reception).

GENERAL INFORMATION ABOUT DULOXETINE
Duloxetine comes as a delayed-release capsule which means it releases the medication in the intestine. This is so it is absorbed better.  When duloxetine is used to treat generalized anxiety disorder, the pain of diabetic neuropathy, fibromyalgia, or ongoing bone or muscle pain, it is usually taken once a day with or without food.


Have you taken this drug and do you agree with this report? Did this medication - Duloxetine - help you?
Posted by Good at 10:05 PM

Email ThisBlogThis!Share to TwitterShare to FacebookShare to Pinterest
Labels: medications, treatment, what works