"Men [with fibromyalgia] often feel broken, even suicidal," says Gavin Levy, an Austin, Texas-based writer who was diagnosed with fibromyalgia four years ago, at age 33. "We've all been there. It feels like your masculinity has been taken away to a degree. You are a provider and protector, then suddenly that role is reversed."

Anyone can develop fibromyalgia but it is most common in adults with the highest rate in women. Men do get fibromyalgia and the ratio is reported at 9:1 that is 9 women for every man. Researchers are not clear why women have higher rates of diagnosis but I believe that it could be that men are either not reporting their symptoms or not being diagnosed with fibromyalgia as many people, doctors included, still believe that fibro is universally a syndrome that women get. 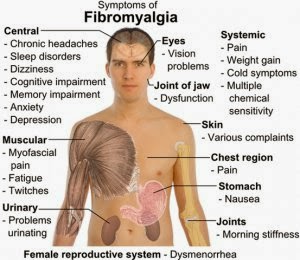 Do men and women have the same fibromyalgia symptoms?
Men seem to have a different symptoms than women according to a 2012 study.
Men with fibro demonstrate a lower pain severity than women but a longer duration of symptoms and disability. Men have a higher pressure pain threshold (PPT) over the 18 tender points and over the second metacarpal and tibialis anterior muscle than women. In men, the intensity of ongoing pain was associated to a more intense painful response over the neck. This study proposes that there may be a different observable type of fibromyalgia in women and men and confirms that women exhibit lower PPT than men.
﻿﻿﻿
﻿
﻿
WEBSITES BY MEN ABOUT FIBROMYALGIA:
The Fibro Man - Life As A Man With Fibromyalgia - Living Life with Fibromyalgia is by Gary McArthur a guy in the UK, with fibro.
Concepts, Ideas, Thoughts & Bullsh!t by Thom Byxbe who has been blogging about Health and Fibromyalgia since 2012.
Fibromyalgia - Peter's journey
Men with Fibromyalgia has a forum
FibroNews by Doc @Fibromen (twitter)

PubMed: Fibromyalgia in men and women: comparison of the main clinical symptoms