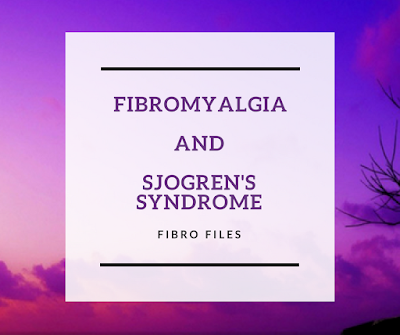 Well this article from News Medical Life Sciences was definitely of interest to me as I have both Fibromyalgia and Sjögren's Syndrome (SS). I was actually diagnosed with SS first and then when some symptoms did not fit with it the rheumatologist said I also had Fibro.

You can watch the video or read the transcript below it.

Sjogren's Syndrome is a systemic autoimmune disorder with the main tissues attacked are the eye's tear glands and the salivary glands of the mouth.

The resulting inflammation and destruction of these glands leads to the symptoms of dry eyes and a dry mouth that characterise the condition.

This information is important because the treatment plan in Fibromyalgia and SS is different and because SS can have serious complications such as lung problems and lymphoma.

SS is usually diagnosed by an ANA test - Antinuclear Antibody test  and 40% to 70% of patients with SS have a positive ANA test result.

This result supports the diagnosis but is not required for diagnosis. The doctor may want to test for SSA and SSB subsets of ANA.

Autoantibodies are antibodies created by the immune system that attack the body rather than a foreign object, and they are not found in Fibromyalgia.

The early stages of Sjogren's Syndrome are often picked up by an opthalmologist because of dry eyes, blepharitis,

or by a dentist because people with SS have a dry mouth which causes many cavities.


Often, a rheumatologist, a doctor who specialises in diseases of the joints, muscles, and bones,  may diagnose the syndrome.
READ FULL ARTICLE

Find out more about Sjögren's syndrome.

Find out more about Fibromyalgia.
I would love to hear from you in the comments below if you have Fibromyalgia and Sjögren's Syndrome too.
Posted by Good at 7:34 PM