Fibromyalgia and compassion meditation - a study 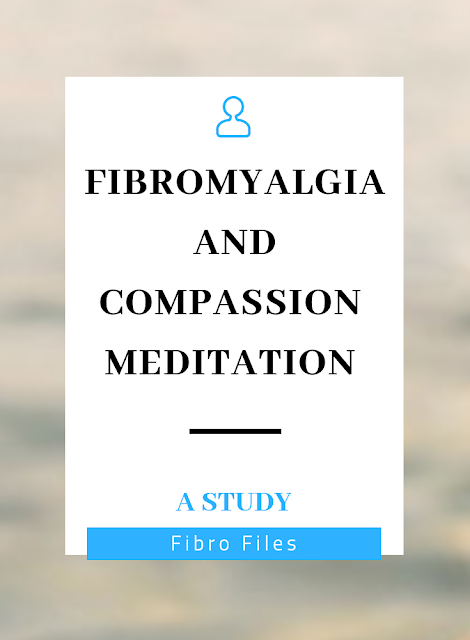 READ THIS ARTICLE OR SCROLL DOWN TO WATCH THE VIDEO.

This study proves that the simple act of meditation exercises reduced Fibromyalgia symptoms to a point where they were no longer felt as severe! This is great news for all Fibro fighters.

The study compared Attachment-based Compassion Therapy (ABCT) with relaxation techniques for treating fibromyalgia. It was conducted by researchers from the University of Derby, the Awake to Wisdom Centre for Meditation and Mindfulness Research in Italy, the Primary Care Prevention and Health Promotion Research Network, University of Zaragoza and Parc Sanitari Sant Joan de Déu in Spain.
Fibromyalgia affects approximately three percent of adults in  Europe and the UK with more women diagnosed than men. So the researchers ran the study with 42 women diagnosed with Fibro who were split into two groups: one doing relaxation and the other doing compassion therapy.
What is Compassion Therapy?
The Compassionate Mind Foundation, says that Compassion Therapy is:

“an evidence-based form of psychotherapy that draws upon our evolved capacity for compassion to facilitate the alleviation of human suffering”.

It was developed by Dr. Paul Gilbert, a psychologist from England who believed that compassion for ourselves and for others reduces intrusive feelings of shame and self-criticism.
Compassion therapy, in this study, used meditation exercises focusing on understanding the universality of suffering, gaining an emotional connection with other people's suffering, and the motivation to act to lessen suffering.

Compared to the relaxation control group, participants in the compassion therapy group demonstrated significant improvements across a range of psychological outcomes and reduced fibromyalgia symptoms by 36 percent. This is a big reduction.
Dr. William Van Gordon, Lecturer in Psychology at University of Derby Online Learning, said:

"The effectiveness of pharmacological treatments for fibromyalgia, such as anti-depressants, has long been questioned and can lead to unwanted side effects. The aim of this study was to investigate the use of compassion meditation as an alternative treatment for fibromyalgia."

When the study was completed, most participants in the ABCT group, who did meditation, showed significant improvements to the point where some no longer met the diagnostic criteria for fibromyalgia.

"As fibromyalgia is linked with sickness-related absence from work, incapacity to work, reduced work productivity and high usage of health-care resources, these results are not only meaningful for the sufferers but could help to address the problem of absence from work and the cost implications of this."