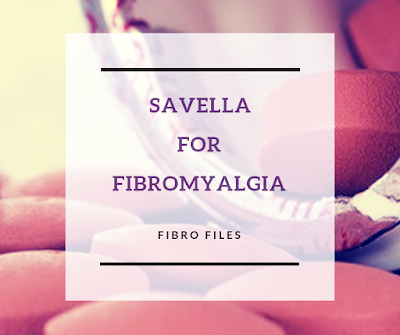 Overall this medication is the first out of all the meds I have tried to help the most. I gave my doctor a hug because my pain went from tears to tolerable and able to go to work and do my job. Sim's user review at Drugs.com

WHAT IS SAVELLA?
Savella (milnacipran) is one of three drugs that have been approved by the Food and Drug Administration to treat fibromyalgia. The other two are Cymbalta (duloxetine)
Lyrica (pregabalin)
Savella is a selective serotonin and norepinephrine reuptake inhibitor (SNRI). What does that mean?

It is similar to drugs used to treat depression and other psychiatric disorders. How is it similar? It is an antidepressant, used to treat depression, and anxiety disorders and it also helps with long-term (chronic) pain, especially nerve pain. While relief of fibromyalgia pain can help people feel less fatigued, milnacipran appears to have an additional effect on fatigue — separate from that associated with pain relief.


Savella was the first drug that really made a difference in my fibromyalgia. It has significantly reduced my overall pain without the sedating side effects of drugs like nortriptyline. Claudia's user review at Drugs.com

HOW SAVELLA WORKS
SNRIs block both the serotonin transporter and norepinephrine transporter. What does that mean?


We may have a lower threshold for pain when we have Fibromyalgia. Doctors think this is due to changes in our nervous system. This means we are more sensitive to pain. This could be because of chemicals in the brain called neurotransmitters.
Savella allows more of these neurotransmitters to travel in the brain and increasing levels of neurotransmitters may ease pain and reduce fatigue.
Neurotransmitters are naturally reabsorbed back into nerve cells in the brain after they are released to send messages between nerve cells. A reuptake inhibitor, like Savella, prevents this from happening. Instead of being reabsorbed, the neurotransmitter stays in the gap between the nerves, called the synapse.
Savella was originally developed and manufactured by Pierre Fabre Medicament in France, and was approved in that country as an antidepressant in 1997. Savella was approved in 2009, by the FDA to help manage fibromyalgia in adults. It is available by prescription from your doctor. Other drugs approved to manage fibromyalgia include Lyrica (pregabalin), a nerve pain and epilepsy drug, and Cymbalta (duloxetine), another SNRI. 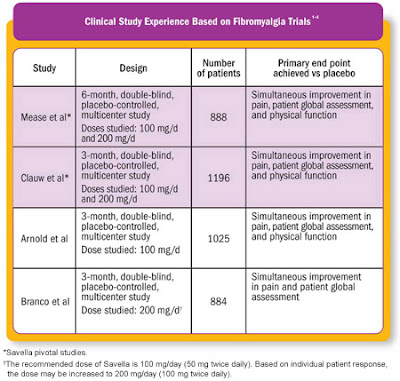 Milnacipran has been studied in four randomized placebo-controlled trials of patients with fibromyalgia. At three months, about twice as many patients on a typical dose will report overall improvement compared with those receiving placebo.  Patients who respond continue to experience benefit at six months.
Mental health scores and levels of bodily pain and fatigue also improve with treatment. However, measures of impact on daily life (e.g., physical function, work absence, job ability) are not improved.
Milnacipran has not been studied over the long term. Recent review of published and unpublished data indicated that milnacipran, pregabalin (Lyrica), and duloxetine (Cymbalta) have different effects on the key symptoms of fibromyalgia syndrome and differences in adverse effects and contraindications.  American Family Physician
COMMON SIDE EFFECTS OF SAVELLA
Common side effects include:

My pain has been worse since starting it. I’m nauseous all the time, get cold chills, go to the bathroom 2 times every hour, I can’t get to or stay asleep even with sleep meds and I itch all over. I have had a horrible experience with this drug and wouldn’t recommend it at all! Crystal's user review at Drugs.com

DECIDING WHETHER TO TRY SAVELLA

The problem with all drugs, or any treatments for Fibromyalgia, is that you do not know if they will work for you until you try them. Have a talk with your doctor and discuss both the risks and benefits of this medication. Also discuss if any other drugs you are taking, such as diuretics or aspirin, may cause an adverse effect hen taken with Savella.
Do not take Savella if:
Also tell your doctor if you are nursing or pregnant or plan to become pregnant.
Tell your doctor about any medical conditions you have, including:


A BRIEF EXPLANATION OF FIBROMYALGIA

Fibromyalgia is a complex chronic disorder with:
Other treatments that may reduce fibromyalgia symptoms include better sleep hygiene, exercise and cognitive behavioral therapy.
RESOURCES:

Email ThisBlogThis!Share to TwitterShare to FacebookShare to Pinterest
Labels: treatment