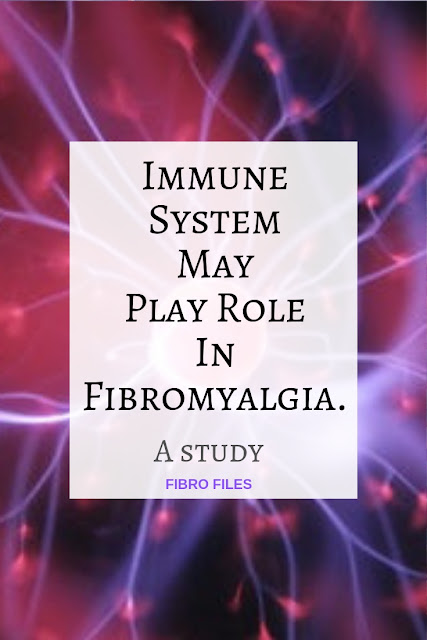 Researchers have found evidence suggesting the involvement of the immune system in fibromyalgia.

Three molecules that affect the immune system may be associated with the risk of fibromyalgia, according to this research.

These three molecules are called CCL11, CCL4 and MEFV. They are created by inherited mutations in genes.

The study is called “SNPs in inflammatory genes CCL11, CCL4 and MEFV in a fibromyalgia family study.”

SNPs (Single Nucleotide Polymorphisms) are variations in the genetic sequence and are associated with disease. When SNPs occur within a gene or in a regulatory region near a gene, they may play a more direct role in disease by affecting the function of the gene.

The study was approved by the Institutional Review Board of City of Hope National Medical Center, City of Hope, Duarte, CA, United States of America.

Some earlier studies have suggested that there is a genetic component to Fibromyalgia and this study has built on that.

A total of 220 patients with fibromyalgia and their parents were recruited into the study.

Patients were diagnosed using American College of Rheumatology criteria including musculoskeletal pain that exists for over three months, associated with fatigue, depression, cognitive difficulty and irritable bowel. Patients with rheumatoid arthritis and systemic lupus erythematosus were excluded from the study.

Fibromyalgia (FM) is a chronic pain syndrome with a high incidence in females that may involve activation of the immune system. We performed exome sequencing on chemokine genes in a region of chromosome 17 identified in a genome-wide family association study.

This sequencing on the genes was done on DNA from blood immune cells. Scientists analyzed the four SNPs from parents to fibromyalgia patients, and found only one of them in the CCL11 gene, was associated with a risk of the disease. After further analysis they noted that the levels of CCL11 protein were statistically higher in most of fibromyalgia patients.


“While the elevated expression of CCL11 is a common event, the inability to generate a robust CCL11 response predisposes up to 36% of patients with a higher likelihood of FM." 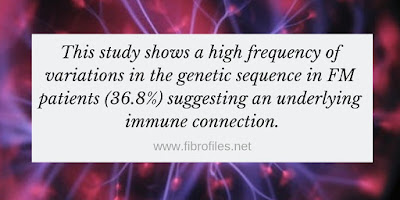 
“This study provides evidence that rs1129844 in CCL11 may be a useful marker for FM and that the high frequency of this SNP in FM patients (36.8%) argues for an underlying immune connection.”

SNPs with significant TDTs were found in 36% of the cohort for CCL11 and 12% for MEFV, along with a protein variant in CCL4 (41%) that affects CCR5 down-regulation, supporting an immune involvement for FM. 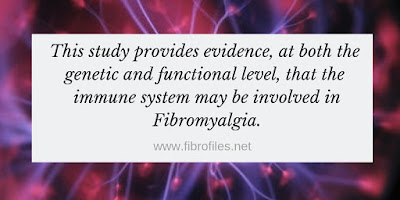 Email ThisBlogThis!Share to TwitterShare to FacebookShare to Pinterest
Labels: fibro, Fibro in the news, understand