The association between pain in fibromyalgia, relative humidity, temperature and barometric pressure. 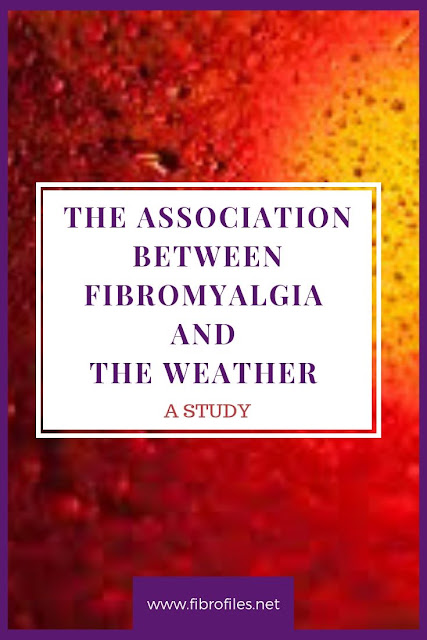 Blame it on the weather?

Self-reported pain levels in patients with fibromyalgia may change according to weather conditions.

Previous studies suggest that atmospheric pressure also called low barometric pressure (BMP) is significantly related to increased pain, but that has limited clinical relevance. Some studies report that there is a significant association between pain levels, temperature, BMP and/or relative air humidity in chronic pain conditions, whereas other studies failed to find such relationships

This study examined whether BMP influenced changes in perceived stress, and if stress levels  affected the pain.

Forty-eight patients with fibromyalgia enrolled in a randomized controlled trail.

They reported their pain and emotional state three times daily for 30-consecutive days before the start of the treatment in the RCT.  .

The patients were unaware that weather data were collected simultaneously with pain and emotional reports. Both the experimenters and patients in the present study were uninformed about the plan to investigate the effects of meteorological variables on pain and stress levels.

The results showed that:
METHODS
The study included data from the 48 patients  The mean age of the sample was 48.6 years.
The patients had to be 18 years of age or older, diagnosed with fibromyalgia according to the ACR-90 criteria, and a manual examination of the patients’ tender points was performed before inclusion.  If patients were using prescribed medication, the use had to be stable for 3 months before inclusion.

Depression and anxiety, general symptoms of psychological distress , impact of fibromyalgia on daily functioning and health-related quality of life were measured at baseline (day 1) before the measurement period.

In the morning (9 AM), afternoon (3 PM), and evening (9 PM), the patients received an SMS consisting of the following 4 questions:
The response to the questions was delivered through a reply SMS containing the Numeric Rating Scale (NRS) values (0–10).

The results from the present study showed that data for pain levels, emotional measures and weather conditions were significantly associated.

In summary, the present study suggests that barometric pressure influences pain in fibromyalgia but on an individual basis that is associated with emotional factors.


STUDY
Blame it on the weather? The association between pain in fibromyalgia, relative humidity, temperature and barometric pressure.