Gray matter volume and pain in Fibromyalgia: A Study 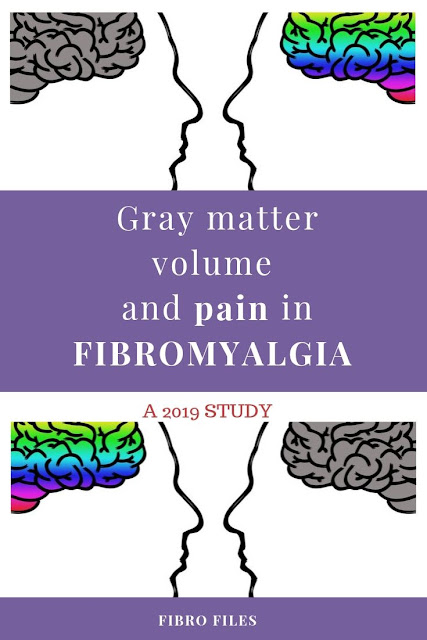 This study 'Subtle changes of gray matter volume in fibromyalgia reflect chronic musculoskeletal pain rather than disease‐specific effects' was published in August 2019.

My take on the study
It did NOT show any difference in the 2 groups that were studied:
(a.) those with Fibromyalgia (b). those with osteoarthritis.

Both groups had increased gray matter volumes in the sensorimotor cortex.

Both groups had decreased GMV in the temporoparietal junction.

It was therefore concluded that these changes were from chronic pain in general.


"we did not identify significant and FMS‐specific GMV alterations when adopting a conservative statistical approach of multiple comparison correction. However, with a more liberal approach increased gray matter volumes in the sensorimotor cortex and decreased GMV in the temporoparietal junction in both pain groups in comparison with healthy controls were revealed. Since both pain groups showed nearly identical GMV changes in these areas, cortical GMV changes in FMS should not be interpreted as FMS‐ specific but might rather reflect changes in chronic pain in general."

It was a relatively small study done by a team of researchers at the University Hospital Muenster, in Germany.  25 women with fibromyalgia,  23 patients with osteoarthritis and 21 people with no chronic pain were assessed.
General pain‐related GMV alterations
The sensorimotor system encompasses all of the sensory, motor, and central integration and processing components involved with maintaining joint stability during bodily movements.
The temporalparietal junction is responsible for sorts through information from the external environment as well as from within the body and processes it into a clear package.
GMV changes in the frontal cortex near the region of the precentral/sensorimotor cluster have been previously shown in Fibromyalgia (Jensen et al., 2013).
These changes have also been seen in chronic pain in general (Smallwood et al., 2013).
This sensorimotor area, of the brain, is known to be important in pain intensity and repetitive painful stimulation in healthy controls. It causes increased GMV due to the pain input (Teutsch, Herken, Bingel, Schoell,; May, 2008). This has been interpreted as a sign of neuronal adaptation.
The Temporalparietal Junction (TPJ) might play an interface function between the salience network and the executive control network for response inhibition and interference control (Kucyi, Salomons, & Davis, 2016).
It has been hypothesized to be the key region redirecting attention away from pain and attempting to keep unwanted thoughts about pain out of awareness (Kucyi et al., 2016). Therefore, abnormalities in this area may lead to dysfunctional control of pain such as an increased anxious expectation (Coppola et al., 2017) or altered affective regulation in chronic pain (Liotti et al., 2000).
A recent study showed reduced activity in the TPJ of adolescents compared to adults during an extinction task, suggesting a role for the TPJ in anxiety disorders. (Ganella et al., 2017)

If you want to read the full report of the study please go here to Wiley Online Library:
Sundermann B, Dehghan Nayyeri M, Pfleiderer B, et al. Subtle changes of gray matter volume in fibromyalgia reflect chronic musculoskeletal pain rather than disease‐specific effects. Eur J Neurosci. 2019;00:1–10. https://doi.org/10.1111/ejn.14558
Please keep in mind that this is just my interpretation of the study and I am not a medical professional just a person with many health conditions, including fibromyalgia, who has an interest in helping others to understand medical research. Lee Good.
I have 20+ years of experience helping people with chronic illness to understand research information. I am the WEGO winner, 2018/19 for building the best patient community around Fibromyalgia. You can join our private Fibromyalgia community, FIBRO CONNECT, here.
RESOURCES: Function of the sensorimotor cortex image. University of Fribourg
Temporalparietal Junction. ScienceDirect
A Nexus Model of the Temporal-Parietal Junction. ResearchGate
Posted by Good at 4:44 PM