What is the best supplement for Fibromyalgia? 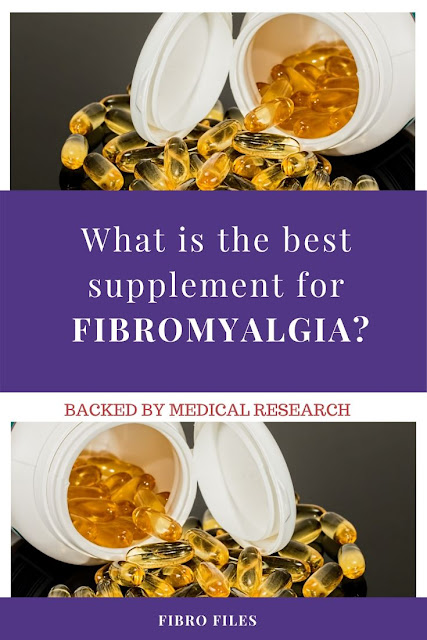 Fibromyalgia (FMS) is a widely misunderstood chronic condition that causes pain, fatigue, unrefreshed sleep and cognitive difficulties including taking in and remembering information.

Way back in 2003, a Mayo Clinic study, found that 93% of fibromyalgia patients were vitamin D deficient. But there was no Control Group in the study so it was mainly disregarded.

In 2014, finally, a randomized placebo-controlled trial was done in Austria.

Methods
The Control Group (CG) received placebo medication.
The fibromyalgia patients were given oral supplementation of up to 2400 units of vitamin D (cholecalciferol also called D3*) a day for 20 weeks.

Their vitamin D levels rose up to about 50 and then, once they stopped the vitamin D, levels came back down to match the CG.

Both groups were re-evaluated after a further 24weeks without cholecalciferol supplementation.

The main hypothesis, of the research, was that high levels of serum vitamin D would result in a reduction of pain.
Patients were evaluated using the visual analog scale score, the Short Form Health Survey 36, the Hospital Anxiety and Depression Scale, the Fibromyalgia Impact Questionnaire, and the Somatization subscale of Symptom Checklist.

Results
A marked reduction in pain was noted over the treatment period in the fibromyalgia patients. Improving the vitamin D levels in FMS had a positive effect on the perception of pain.

Many tests have been carried out since on the value of Vitamin D on widespread pain including:

The results of these tests have all been similar and all say that vitamin D supplementation is able to decrease pain scores and improve pain, musculoskeletal symptoms, level of depression and quality of life of patients.

In my humble opinion this makes vitamin D the supplement that all patients with Fibromyalgia, or undiagnosed widespread chronic pain should trial.

* “D3 mimics the way our bodies make vitamin D from sunlight and it’s more easily absorbed, making it the best option for most people.”

RESOURCES:
Effects of vitamin D on patients with fibromyalgia syndrome: a randomized placebo-controlled trial.
Posted by Good at 12:35 AM